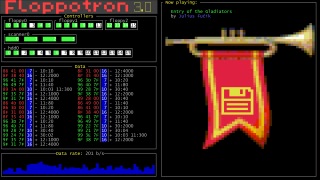 As a fan of music, this is pretty cool.

The Floppotron 3.0 is a PC-generated musical orchestra comprised of 512 floppy disk drives, 16 hard drives and four flatbed scanners. Zadrożniak, the mastermind behind it all, has been working on several versions of the project since 2011.

Fast forward to 2022, and Zadrożniak now has a full orchestra of computer hardware playing tunes from Michael Jackson, Queen and several other famous artists.

A key aspect of the system is the noise made by the electric motors, followed by the frequency it generates that in turn produces different notes.

Zadrożniak has a more detailed explanation of how the very cool system works on his blog.

Sources: Paweł Zadrożniak Via: The Verge