As Techstars’ newest accelerator program in Africa, the announcement re-emphasized the expansion plans Techstars touted when it hired Maëlle Gavet as CEO last January. The Lagos accelerator adds to the long list of dedicated generalist and specialist programs the firm has managed to create globally over the past couple of years.

Companies that get accepted into any of these three-month programs receive $20,000 plus a $100,000 convertible note in exchange for 6% common stock, access to the Techstars networks and other resources. In 2021, the Colorado-based accelerator ran up to 50 accelerator programs across 18 countries, most of which were based in North America and Europe.

In Africa, the accelerator test-ran an accelerator program in Cape Town between 2016 and 2017. Techstars has invested in more than a dozen African-based startups through other programs. Thus, it was only a matter of time before one of them hit Africa — and where better to start than in Nigeria. Most of the startups backed by the accelerator on the continent are based in the country including Farmcrowdy, Healthtracka, TalentQL, OurPass, Rentsmallsmall and Treepz.

The Nigerian tech ecosystem has grown tremendously in the past five years, with influx of venture capital reaching over $1.8 billion in 2021. Lagos is at the epicenter of this growth. According to this data, the city is one of the fastest growing ecosystems worldwide and the number one African startup city as of last year. By partnering with ARM Labs, Techstars hopes to capitalize on the immense opportunity created by its startups. The program’s inaugural class starts in December, culminating in a Demo Day next March.

TechCrunch caught up with Gavet on her trip to Lagos and spoke at length on how the program would work, opportunities for founders and why the accelerator is bullish on Africa.

TC: There are many Techstars programs, from London to Seattle to Riyadh to Oak Ridge-Knoxville, and sometimes it’s hard to keep count. But before launching in Lagos, it seemed only the Toronto program took actual notice of Africa, as evident in the 15 startups represented from the region in its program. Why is this the case?

MG: Techstars has been active in Africa since 2011. We have run 350 local ecosystem-building events, primarily in Kenya, Nigeria, Ghana and South Africa. We also had a Barclays Accelerator program in South Africa for two years, and we have made close to 100 investments in African founders. But you’re right. The most recent Toronto cohort was heavily focused on Africa, honestly, more because I think Canada has a very welcoming visa system for African founders and so it just makes it a lot easier for them to go to the Toronto program than it would be to many other Western programs. But Techstars has been very actively looking at Africa in general and the discussion last year was that we should, given how vibrant the tech ecosystem here is, have accelerators here in Africa.

I am in Nigeria this week — I’m also going to Kenya — because I’m here to figure out the right way to do it, where we will open them and so on. We decided last year to open one in Lagos and we are very much hoping to be able to double down and explore other options in terms of different hubs across Africa.

Why partner with ARM for this program in Lagos, and can you describe the structure?

We have pretty high standards regarding the type of company we partner with and the three-month program we put in place. And that model has worked out for the last 15 years, so I’m pretty confident. Any founder going to apply to these and then be accepted into this program here in Lagos will benefit from the experience we have accumulated over the last few years, from the playbook that we have to run this program, from the international network that we have.

Soon, we’re going to announce the new managing director for Lagos, some with local experience as an entrepreneur and experience working with the regulators as well. Now, we decided to partner with ARM because we wanted someone who was embedded into Nigeria and understands the country better than us from a business perspective. 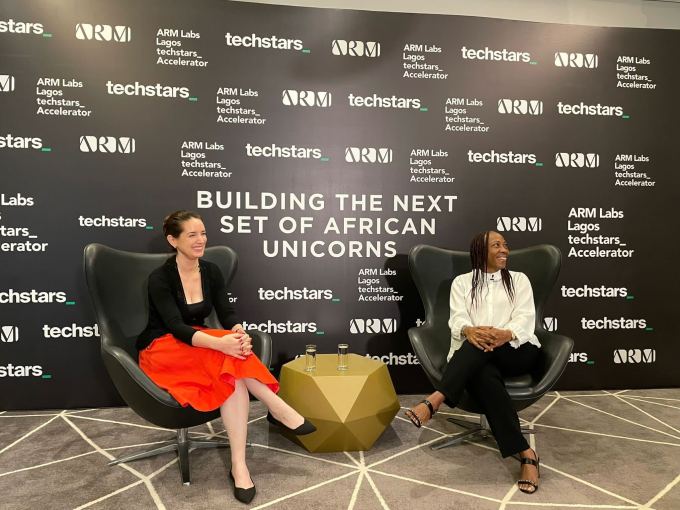 We wanted a business partner who understands Africa and what it means to do business across Africa. And I think we’re realistic enough to realize that we don’t know everything and can provide much better service to founders when we combine each other’s strengths — the global network of experts, or playbook, all the infrastructure we have, and the knowledge and experience and local network of a partner like ARM.

Can international founders apply for this program and how would they need to come down to Lagos to participate?

While there is so much knowledge and energy from founders in Nigeria, we also expect that there will be many African founders. For them, it would be easier and more appropriate because they’re mainly focused on the African market and so it will be better for them actually to come to the Lagos accelerator. That’s part of why I’m going to Kenya next because I think that there are quite a few Kenyan founders who would prefer coming to Lagos than going to Europe or North America.

And then, quite a few founders in Europe and the U.S. are looking at Africa as a tremendous market for their business. And so I expect that we will have applications from them and those who get in will have to come down. At the end of the day, we’ll select the best.

As an African founder, why would I apply to Techstars Lagos rather than Toronto, New York or other Western programs?

We have 60 programs and accept founders from around the world. So if you’re a Nigerian founder and want to apply to any Techstars accelerator, you can do that anywhere in the world you want.

Now, the way we recommend people to do it is to think about first, is there a sector that you’re interested in and follow through with that. So, for instance, if you’re in the music industry, we have a music accelerator in LA where you may want to apply. If you are much more on the agriculture and food tech side, we have an accelerator in Minnesota for that. You can also decide that for whatever reason, you want to experience North America and have a different experience of how business is being done elsewhere, so you may want to apply to Toronto or New York; these are generalists program.

You may also decide that you want to go to a market close to Africa with a local connection, for example, the U.K. and European markets. And so you can apply to the London one or the Paris one. When you look at the 20+ investments we’ve made in African founders, they came from all around. You’re very well aware of Toronto, but again, we have Nigerian founders who went through New York, London and Bangalore, so that’s not going to change.

Now, you may also decide that you want to stay in Africa. And for you like being either for a personal reason or business reason, like actually, Lagos is the place where you want to be because you can’t leave your family for three months, or because again, like you want to really focus on the Nigerian market, and then you should apply to the Lagos accelerator.

Is the Lagos accelerator sector agnostic?

The one we’re doing with ARM is focused on fintech and prop tech. There’s a robust industry growing up in Nigeria around these two topics. So we expect that there’s going to be a lot of founders.

Also, if you look at ARM, they’re great partners for founders. And so, I would recommend those founders who apply to this accelerator to look at how ARM can help them. And as a result of that, if you’re not sure they can help you, then maybe you should look at another accelerator program. But if you think that they can, you absolutely should apply. If you don’t know, you should contact us and talk to us.

Will the startups in the Lagos accelerator be able to assess follow-on capital?

After they go through the accelerator, we’ll support some to raise money from other investors depending on where they are in their development, their fundraising stage, etc. We have a fund called Techstars Ventures, which is the fund that we use to do follow-on checks in seed, Series A and some Series B.

With what’s happening with venture capital slowdown and economic downturn, is this the best time to launch a program in a new region? Also, how do you advise founders to deal with this current situation?

I think the program is even more relevant now that there’s a downturn and the economy is slowing down than ever before. So what we do at Techstars is help founders build real, healthy, sustainable businesses. This is even more important during a downturn because you need support, network and capital more than ever in this period. So from that perspective, no concern whatsoever.

I think that when it comes to the advice I give founders in general, don’t forget that nobody succeeds alone. It even holds more true during a crisis. And that may be an additional reason to apply to Techstars because you will need more than ever to support the capital program and the mentorship to succeed during the economic downturn.

One of the seeming objectives behind Techstars starting a Lagos accelerator is to create unicorns from the continent. Lagos is also home to some of Africa’s unicorns like Flutterwave and Interswitch, but how do you hope to achieve that, seeing that the accelerator is yet to mint one after years of investing?

We are what we call universal investors. We try to have a portfolio representing all industries and all types of people in the world. The reason why I’m convinced that there are going to be a lot of unicorns in the future is that just look at the African market. You can even take Nigeria as an example: huge population, growing consumption and various problems and challenges that entrepreneurs are tackling.