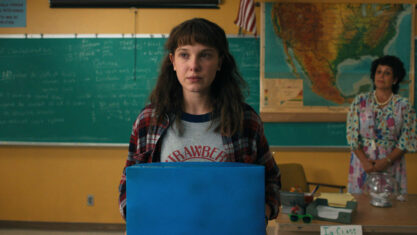 Netflix announced the news on Twitter alongside a brief synopsis:

“Set in a retro-futuristic past, it follows an orphaned teen (Brown) as she traverses the American West with a robot and an eccentric drifter in search of her younger brother.”

According to The Hollywood Reporter, Guardians of the Galaxy star Chris Pratt is also in talks to join the film. While Electric State would be the first collaboration between Brown and the Russos, the brothers did, of course, work with Pratt on Avengers: Infinity War and Endgame.

Christopher Markus and Stephen McFeely, who wrote the Russos’ four Marvel films, including Infinity War and Endgame, are penning the Electric State screenplay, based on a 2018 illustrated novel by Simon Stalenhag. Notably, Electric State will have an Avengers-level budget that’s “north of” $200 million USD (about $257 million CAD), according to The Hollywood Reporter. This would make it one of Netflix’s most expensive films ever. Filming is expected to begin in October.

Following their tenure at Marvel, the Russos have formed a close relationship with Netflix. Joe Russo co-wrote Extraction and the upcoming Extraction 2, starring Chris Hemsworth, while both Russos produced the action films. The Russos also directed The Gray Man, an action-thriller that stars Canada’s Ryan Gosling and reteams the brothers with Captain America star Chris Evans and Markus and McFeely.

While Extraction 2 doesn’t yet have a premiere date, The Gray Man is set to hit Netflix on July 22nd.