Samsung’s upcoming foldables are the ultimate tools for productivity and self-expression, exec says 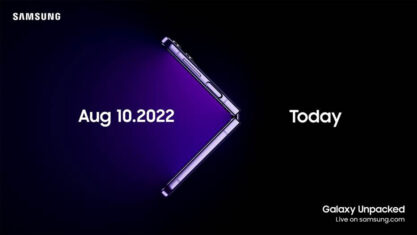 August 10th is the official launch date for Samsung’s next set of foldable smartphones, and the company’s president and head of MX Business says they’re a sight to behold

“I can’t wait to show you the potential of our new Samsung Galaxy foldables as the ultimate tool for both productivity and self-expression,” TM Roh wrote in a blog post about the Galaxy Z Fold 4 and Flip 4 smartphones.

“At our upcoming Unpacked on August 10th, you’ll see that the impact of our innovation is not only about what technology can do. It’s about what you can do. We’ve once again taken our inspiration from the most important source — Galaxy users — to push the limits of what’s possible.”

Looking back on the Fold 3 and Flip 3, Roh said 70 percent of Galaxy foldable users switched to Flip 3. The company shipped 10 million foldable devices worldwide in 2021, increasing the figure by 300 percent since 2020.

Renders leaked earlier this month show the Galaxy Z Flip 4 could share many similarities with its predecessor. However, the device does appear to have more pronounced volume buttons and could support 8GB RAM with 128/256Gb storage options.