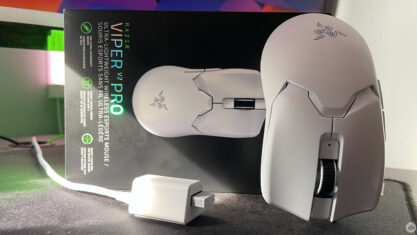 Razer is undoubtedly one of the best PC peripheral-maker globally. The company’s 2019-released Viper Mini was touted as one of the lightest mice on the market, and now, the PC accessory maker seems to be outdoing itself.

Razer today announced its latest gaming mouse — the Viper V2 Pro that weighs in at just 58g, even lighter than the Cooler Master MM731.

The key to making the mouse this light was by removing all the fluff and focusing on what matters for the mouse to perform. The Viper V2 Pro features an absence of LED lights, and the right-aligned side buttons. Its shape is similar to the 2021-released Viper 8K, and it features a symmetrical design for right-handed gamers.

The Viper V2 Pro also got rid of different buttons to adjust the DPI and power on/off the mouse. The two buttons have now been integrated into one, further cutting down on the peripheral’s weight.

The company has also changed the shape of the mouse’s PTFE feet to make it glide effortlessly, along with equipping it with a new Focus Pro 30K Optical Sensor. The switches have also been upgraded from Gen 2 to Gen 3, and overall battery life has been extended to up to 80 hours.

The Viper V2 Pro can be used with the accompanying USB-C wire or with a 2.4GHz wireless connection.

The mouse is available starting today at Razer’s webstore in White and Black variants for $189.99.