Pixel 6a teardown shows off flexible, plastic back panel 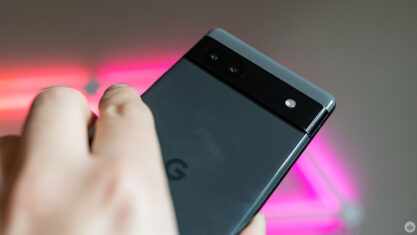 Ahead of the Pixel 6a shipping to customers next week, and after the initial round of reviews arrived, teardowns of Google’s latest smartphone have emerged.

Perhaps the most interesting part, at least to me, was the removal of the plastic back plate. Google says on the Pixel 6a spec sheet that the phone uses a “3D thermoformed composite back with tactile alloy frame.” In my review, I noted it feels a lot like glass and frankly, I’m surprised how well the 6a’s backplate mimics the feeling of glass. I can’t tell the difference when holding it alongside the glass-back Pixel 6.

Other highlights from the teardown include needing to use heat to soften the adhesive and remove the screen. The video shows off the location of the cutout for the proximity and ambient light sensors, which sits just below and a little left of the selfie camera cutout.

Frustratingly, the charging port is soldered to the main board, which means it’ll be difficult to replace if it fails.

PBK awards the Pixel 6a a 7/10 repairability score, although frankly, it looks like a really difficult process to me. That said, if you’re adept at doing your own phone repairs, then this might seem straightforward.