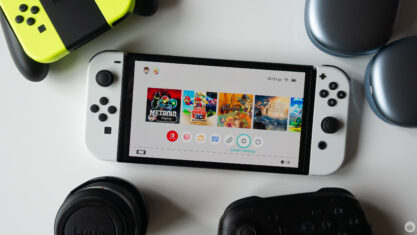 Nintendo says it shipped 4.11 million Switch consoles between January and March, bringing the home console-hybrid device’s total to 23.06 million for the 2022 fiscal year.

The Japanese gaming giant originally said it planned to sell 25.5 million units, followed by 24 million and 23 million. This amounts to a 20 percent decline year-over-year compared to 28.83 million in the year prior. The gaming giant cites a shortage in semiconductors and other components as the reason for the decline in shipments.

In total, Nintendo has shipped 107.65 million consoles since March 2017. Though the Switch recently outsold the Wii, it still has a ways to go before it catches up with the DS’ 154.02 million and the Game Boy’s 118.69 million units. On the software side of things, Pokémon Legends: Arceus sold 12.64 million units.

The company says that it plans to ship 21 million Switch consoles during its current fiscal year. Given the decline in sales, it’s likely that Nintendo’s Switch has finally hit its peak slightly over five years into its life cycle.

Looking to the future, Splatoon 3, Xenoblade Chronicles 3 and Pokémon Scarlet and Violet are set to release in the coming months. The Legend of Zelda: Breath of the Wild, arguably the most anticipated title for the Switch, was recently delayed to spring 2023.

It’s still unclear when or if Nintendo plans to release the often-rumoured Switch Pro. The Switch OLED model, a relatively minor upgrade to the handheld, released back in October 2021.