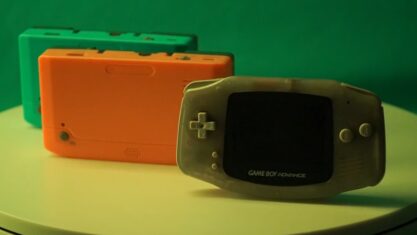 Nintendo’s Game Boy Advance (GBA) had a great run. While a seminal piece of portable gaming hardware, many GBA games are unplayable on modern consoles. However, a new DIY enables players to turn their old Game Boy Advance into a standalone console for a TV.

Many consider Game Boy Advance one of Nintendo’s greatest handheld achievements. It has a beloved games catalogue, with many tentpole games of the 16-bit generation. Thanks to IntecGaming’s new GBA HDMI Kit, the Game Boy Advance can connect to a TV or display and live on with HDMI and Bluetooth connectivity.

The kit is made of a compact console that houses a customer motherboard featuring HDMI and analog video-out functionality. USB-C powers the kit and it features a port for a SNES controller. However, the kit also supports modern controllers like the DualSense and Xbox gamepads.

Many of these retro-turned-modern makeshift consoles try to include emulated games, which can instantly raise red flags for Nintendo. Here, the built-in gaming library is non-existent. Instead, IntecGaming’s DIY Kit requires the player to actually use physical cartridges.

Due to this decision, players must take the important guts of the Game Boy Advance and transfer them to the console kit. The best part of all is that the kit is straightforward for the user. It requires no soldering and essentially only the use of a screwdriver. IntecGaming’s hardware features spring-loaded raised pins on its motherboard used to easily connect the Game Boy Advance’s hardware.

The kit comes with all the tools you need, including the screwdriver required for the non-traditional screws Nintendo uses. The kit also includes PCB to transform the now empty Game Boy Advance shell into an operational controller.

Nintendo’s support of its classic games catalogue is rather frustrating. Many games ranging from the NES, SNES, and Nintendo 64 generations are supported on the Nintendo Switch Online subscription service. However, Nintendo Switch Online does not currently feature Game Boy Advance titles. Although, rumours point towards a possible future where select games may be available to subscribers. We’ve even picked out 12 of the best games Nintendo should feature.

If you are keen to purchase IntecGaming’s GBA HDMI Kit, it is available on Kickstarter. Early backers expect to receive their kits starting in July. The kit is available for $110 USD (roughly $142 CAD.)