If you want your Switch of Steam Deck to melt, take it outside in a heatwave 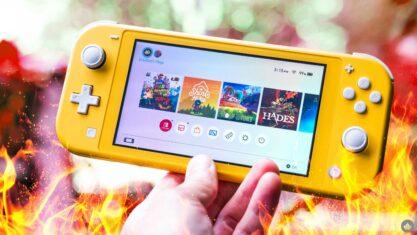 If you’ve ever looked at your Switch OLED model or Steam Deck and thought to yourself, “I wish I could make this gaming handheld device melt,” now is your chance.

Nintendo and Valve warned users not to take their respective portable consoles outside amid the ongoing heatwaves currently ravaging regions around the world, including Canada, the U.K., Japan and more.

Nintendo’s official Japanese Twitter account tweeted out a diagram to help prevent overheating that tells players they should only use the Switch in an environment between 5 and 35-degree Celsius and that they should avoid blocking the handheld’s rear intake and exhaust vents (via Nintendo Life).

Valve also recently tweeted a warning to Steam Deck users, stating that the console should be used in temperatures between 0 and 35 Celsius and that running the handheld in conditions warmer than this range above this will hinder the handheld’s performance. In fact, if the Steam Deck gets too hot, it will shut down altogether.

Given it sometimes feels like I could cook an egg on the Steam Deck’s back while playing resource-intensive games like Elden Ring, this isn’t surprising.

For our friends in the midst of a heatwave, a quick note about Steam Deck in high temperatures. Steam Deck performs at its best in ambient temperatures between 0° and 35° C. If the temperature gets higher than this, Steam Deck may start to throttle performance to protect itself.

A bit more detail about this – Steam Deck’s APU runs well at temperatures up to 100°C. At 100°C, it will start to throttle performance, and at 105°C it will shut down. Again, this is to protect itself (and you) from damage.

So what should your key takeaway be here? Don’t take your Switch or Steam Deck outside in the middle of a heatwave unless you want to watch it melt.