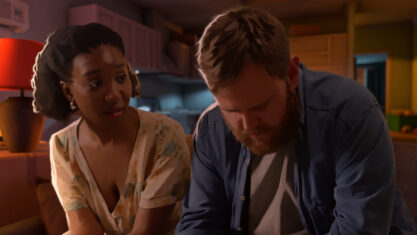 Narratives in video games are getting more and more complex, as seen in As Dusk Falls from Interior/Night. As the medium evolves and matures, video games are able to tell deeper stories with very compelling subject matter. Often times these stories give players the agency to dictate where the story goes. A choose your own adventure type of experience, if you will.

For many developers, these stories are often inspired by other mediums. Take, for instance, Interior/Night’s debut game is inspired by many fan-loved crime dramas like Breaking Bad, Fargo, and Dog Day Afternoon. However, As Dusk Falls also features stress-inducing choices where relationships and lives are impacted.

We had the chance to sit down with CEO and Creative Director Caroline Marchal and Production Director Charu Desodt to discuss how Interior/Night utilizes the gaming medium for its narratives. Additionally, we were able to gain some perspective on As Dusk Falls’ unique multiplayer integration.

Both Marchal and Desodt are longtime veterans in the gaming industry and bring their own unique experiences to the table. Marchal has worked on narrative-heavy titles, including Heavy Rain and Beyond: Two Souls. Desodt was a core programmer of Sony’s SingStar franchise. 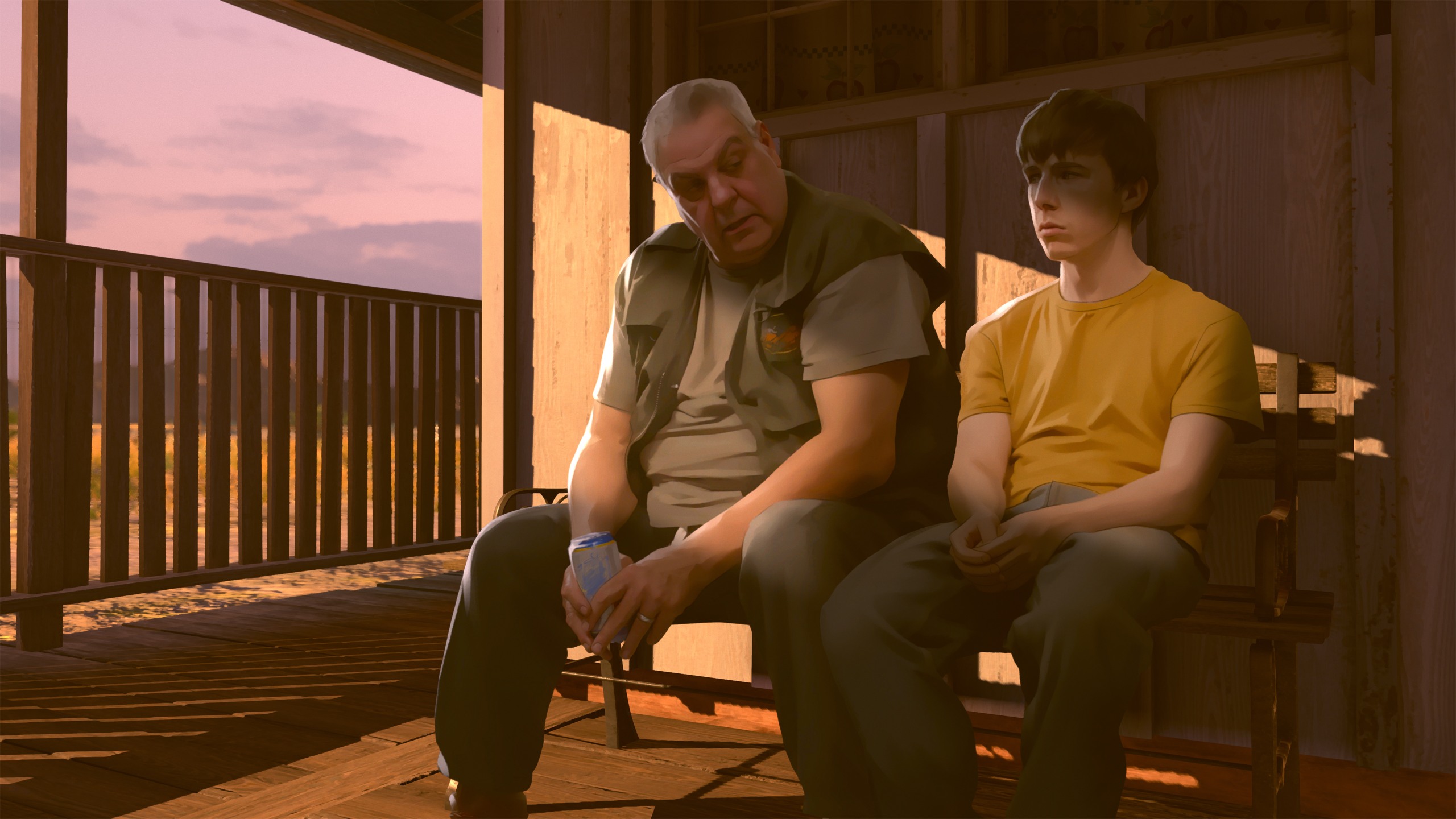 Question: I’d like to talk about the current landscape of the games industry. We’re now a couple of years into a brand new console generation. Games are able to tell diverse stories like never before, and the fidelity of those games is reaching new highs. As a game creator, how do you approach a new idea in this era?

Marchal: It’s really about telling human stories, grounded stories. We have authenticity, coming from our personal experience and also our diverse team. We’ve got a very big mix of talent.

Desodt: I’d say in the team, we are about 50 people. When I first started, at the studio’s inception, there were just five or six. But it’s really a team of veterans from the games industry, but then also emerging talent from TV and film. So we’ve taken all those influences and perspectives and put them into the game.

In terms of innovation, I’d say that a lot of the people in the team have worked on innovative games and have really challenged the existing genres. I think Heavy Rain did that, obviously, within the narrative genre. Some of the games I worked on did that within the social gaming genre and music genres.

Desodt: Yeah, that’s like a billion-dollar franchise. So, I think a lot of gamers are early adopters. They’re very used to putting tech and creativity together. This broadening of the games industry, culturally, is exactly the right direction. Everything’s changing from the platforms, the game types, and the people who are interested in games. So it’s just a natural evolution. 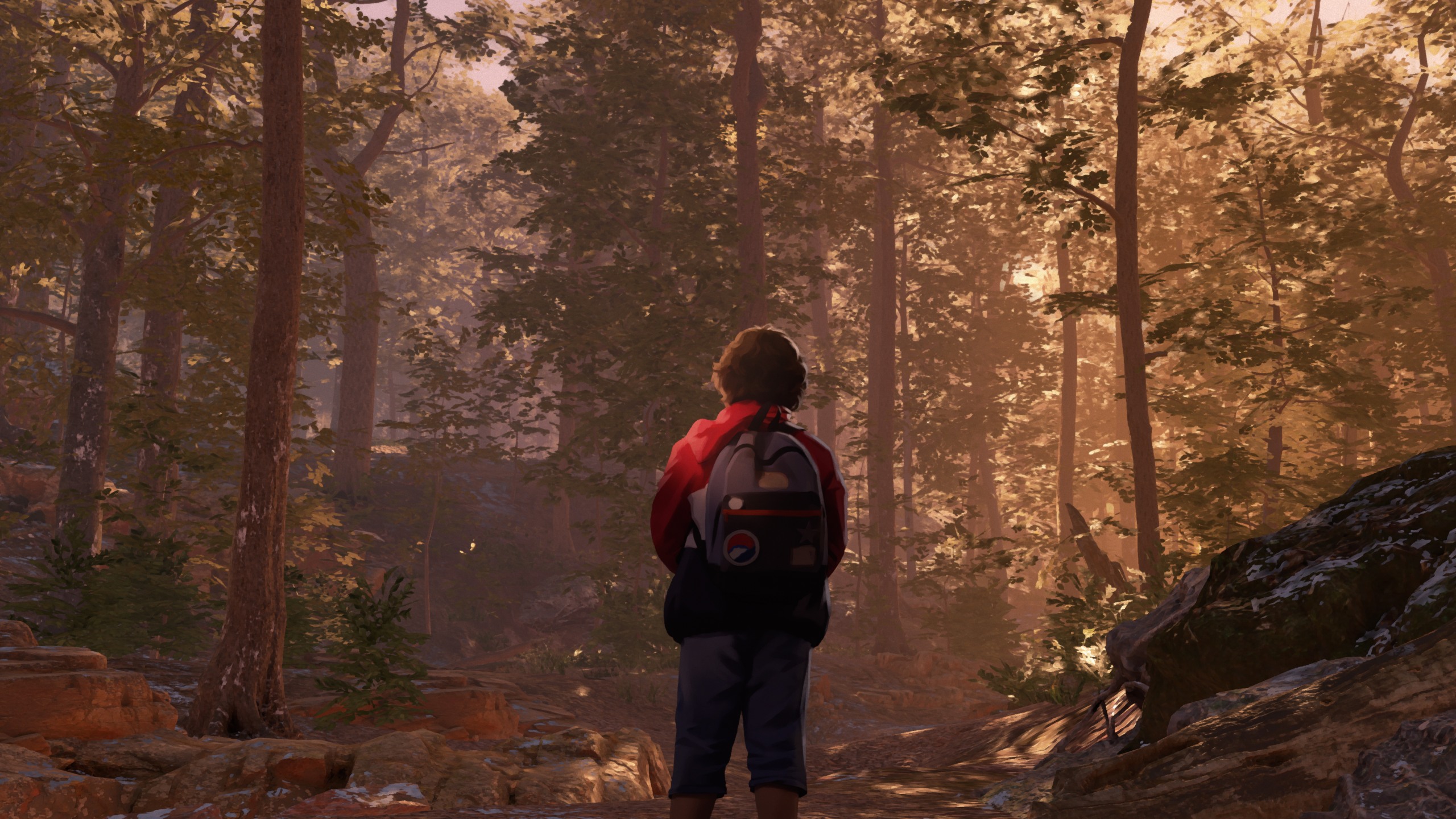 Q: Gaming has evolved to a point where genres are continually bending around the media more than the other way around. I’ve seen the studio refer to As Dusk Falls as an “interactive drama”. What does this mean to you and the project?

Marchal: It’s a story you can play. We say drama because it’s more specific, it’s a crime drama. It’s got this mix of crime elements with the hostage situation and then the escape across multiple states. The drama is about the people and the relationships. What you decide to do with your wife or your child and how you try and accommodate your family’s demands. That might conflict with your morals or your own safety. There are really universal struggles and questions we can all find relatable in our own lives.

Desodt: What is really unique for me is it’s super simple to play. It was designed that way from the ground up. But then you have a really complex video game base behind how we achieve that simplicity. Plus, all the different ways that you can play the game. It’s cross-platform; you have Twitch integration. Single-player is a brilliant experience, but the multiplayer element is really, really key.

Q: Caroline, your history in the gaming industry has led you to work on some of the most prolific narrative-based games. How different is the approach in narrative now?

Marchal: I think the main thing I wanted to expand on from my past experiences was to go multiplayer. to find a way to make experiencing an interactive story, a communal and social experience. It started for me in 2014 with TwitchPlaysPokemon. It was really cool to see the way people were like struggling to achieve a common goal or disagreeing on how to achieve this goal. I was just struck by the community it created.

I was wondering what’s the narrative equivalent of that? What would it mean to navigate the story, not as each player has a character, but as players sharing a character? Every player is a character is a voice in the character’s head. try to make decisions and debate and try to do what’s best for the character.

It’s like you’re on a boat. You’re on a river that is sometimes slow, sometimes really fast and scary. And you get on this adventure with your friends or people you care about. 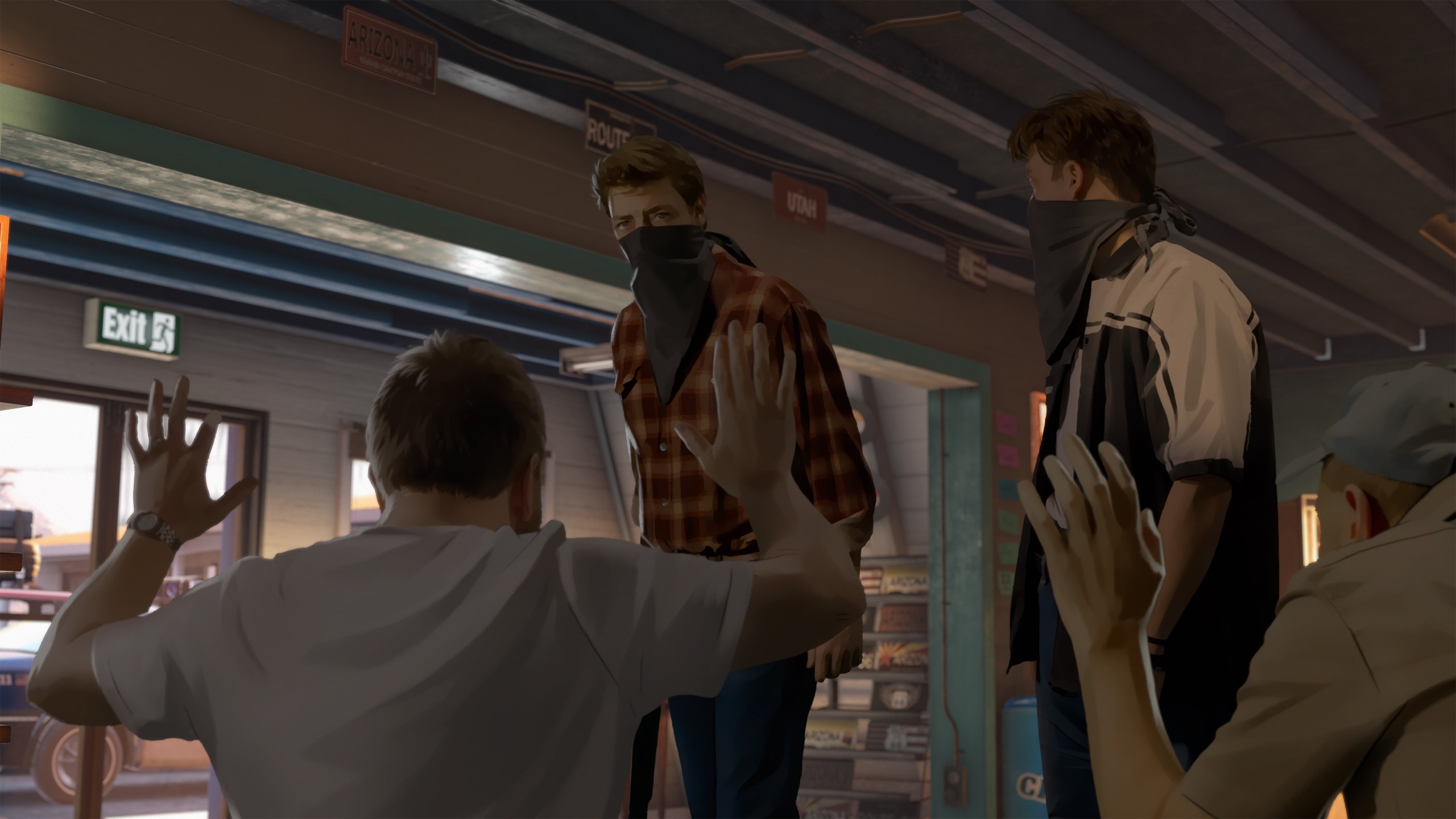 Q: If I look back at some of my favourite games, I find that many do dance around this melding of games and traditional storytelling ie: television or movies. I think of games like Alan Wake, Telltale’s catalogue, and even Heavy Rain. What makes this such a compelling combination not only for players but for creators?

Marchal: I guess like for us, it’s all about getting inspiration from the best storytellers at the moment. I think TV is very prolific, very bold, there’s no topic that’s off limits. Whereas in games, I don’t think we’ve seen that much variety of storylines yet. We set the bar higher for ourselves with high-quality scripts.

But I’m a designer, I’m not a filmmaker. I don’t want to be. I love games. Those interactive stories are just so powerful for what we’re doing. We were just discussing before that when you make decisions, you put a bit of yourself into each decision. So in doing so, it tells you something about yourself. You have this agency, this story, but you also craft the journey, and that’s like something over mediums can’t provide anywhere else.

Q: How did the team approach what I can assume is a fine line between traditional storytelling and the interactivity components of As Dusk Falls? Was it ever a balancing act?

Marchal: Yeah, we strike that pace of a choice or an interaction every 20 seconds. That makes sure you’re on the edge of your seat. You can’t relax like it’s a cutscene. You never know when it’s gonna pop. So you have to lean in and be on the edge of this line. I think that’s a good balance that we found. Sometimes, there’s a bit more like at the opening or the ending of a chapter, of course. We give players a bit more time to step into the story. But that’s the cadence we decided on.

Desodt: I’m in awe of the writing team. In terms of the character placements and the cameras and the timing, I really feel like the timing borrows a lot from film and TV. You’ve got the game elements where you’re interacting with the game. Then you’ve got the story which is unfolding, but you’ve got the emotional journey that the player is on. All of those things combined to be at the right pace. So I think that’s the special sauce.

Q: What really appeals to me about As Dusk Falls is this sense of ownership. It reminds me of classic choose your own adventure novels. Even in the multiplayer offering, it’s the players that are able to define the narrative and outcome. How challenging is it to offer this amount of freedom while ensuring the story doesn’t suffer?

Marchal: It’s a difficult process. We have an experienced writing team. I’ve been doing this for over 20 years. There are moments in the story that are mainline. The cops will always show up at a motel otherwise, there’s no story.

The shape of the branching story isn’t a pyramid. It’s more like a Christmas tree. The base is wider than the tip where you start the story. But we still have points where things come back. Jay will meet Vanessa, no matter what you do, because she’s an interesting character. She comes into the story. What happens with her then is really up to the player. Designing a narrative space is like making a very long movie. I think we wrote the equivalent of 12 movie scripts to like to make this game. 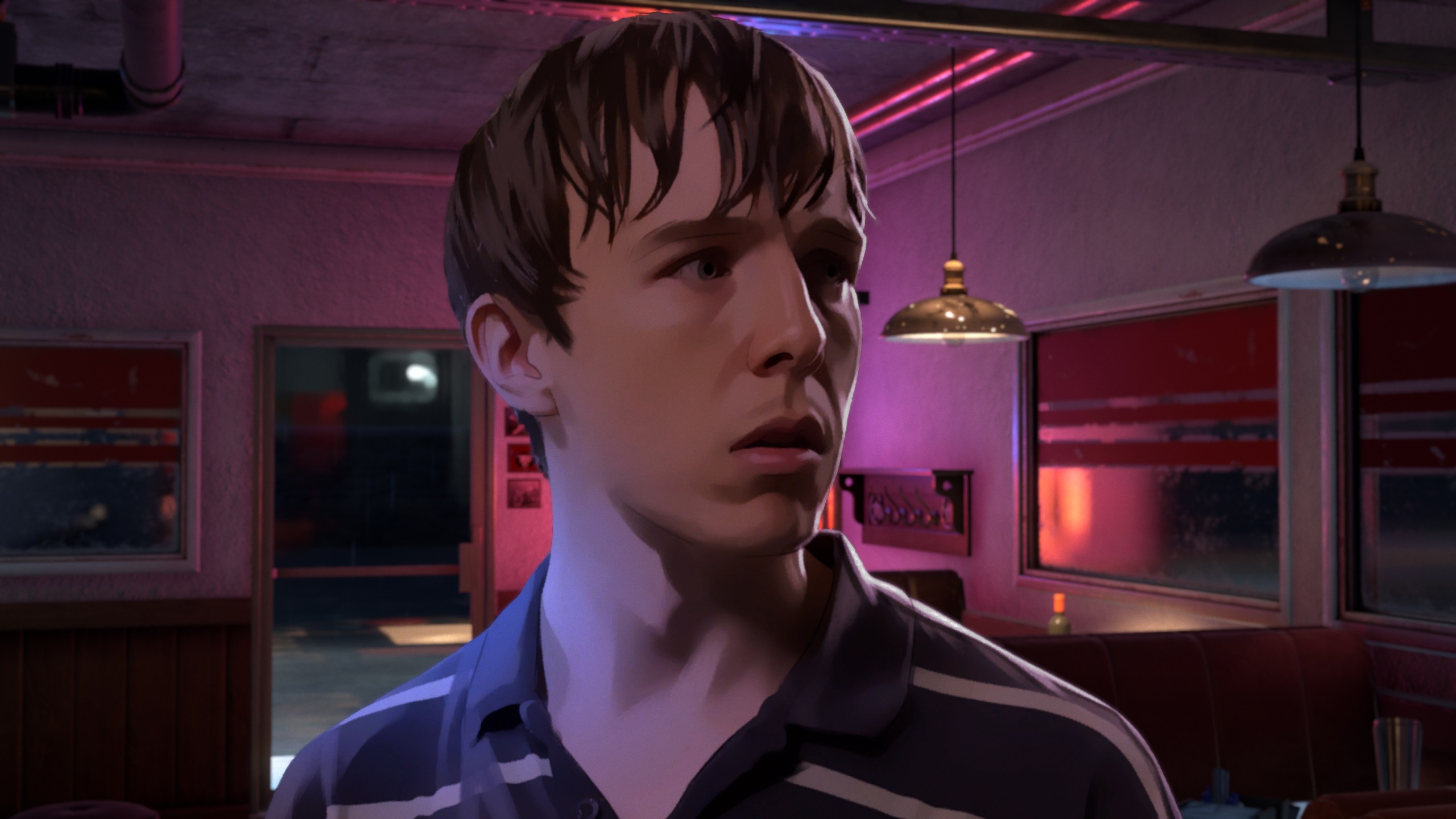 Q: As Dusk Falls looks like a crime drama that I’d be watching on HBO. I see creative choices that harken to things like Breaking Bad, True Detective and Fargo. Is there a series or film that was used to inspire As Dusk Falls, whether it’s the story, characters, or visual aesthetic?

Marchal: I think you mentioned almost all of them. Fargo, but specifically the show. I think the film is great, but the show is fantastic. It’s underrated. Some of the characters are slightly larger than life. Another big one I want to call out is Dog Day Afternoon, which is a film from the 70s of Al Pacino trying to rob a bank, and it goes really, really wrong. That’s the kind of setup that offers the pressure cooker setup that we have in Book One in the motel.

Desodt: I hadn’t seen a Dog Day Afternoon until you mentioned it to me, Caroline. Right, in the early days. Then when I saw it, and that’s a really strong reference. You have these flawed characters who are very relatable, very ordinary. They have their everyday lives. Those pressure cooker moments where they find themselves in crazy situations.

So yeah, and I’d say the results for the players are quite unexpected as they go through the different branches. There isn’t a golden path through this game where you kind of chose wrong, so we’re going to take you back. Every choice you make is valid. There’s no right or wrong just like in life.

Q: Now that As Dusk Falls is out in the hands of players, what’s been the most surprising thing you’ve seen so far?

Marchal: I would say the thing that strikes me is how streamers engage with the game and their community. We have this Twitch mode where you can have your audience vote with you, they vote in the chat. Their vote is counted in the game. It creates a very cool dynamic between the host and their audience. We never tested it for real, so it’s great to see this take off.

It’s great to see people root for Jay as well. I love that.

Desodt: One of the things that we share are personal emails. Something I hadn’t anticipated was that people will feel so moved emotionally that they want to relate to us and send us, you know, examples of their experiences. We had one email, which was just two words: “Thank you.” We had another email from somebody who’s blind who said, “I was recommended to play this game.” Our accessibility features are real front runners in terms of gaming.

This interview has been edited for language and clarity.

As Dusk Falls is currently available on PC, Xbox Series X/S, and Xbox One. Check out what our very own Bradly Shankar thought about the game here.