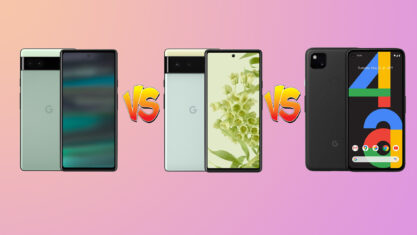 After months of leaks and rumours, Google finally announced its latest mid-range smartphone, the Pixel 6a, at the Mountain View, California-based company’s I/O event.

The new mid-range smartphone costs $599, and will be available for pre-order on July 21st.

It’s a smart, powerful phone that delivers the helpful and personal Pixel experience at a great price, starting from $449#GoogleIO pic.twitter.com/Gtb37Qjmy5

So before you make plans to get your hands on the new Pixel device, you might want to compare how it holds its own against the 2020-released Pixel 4a 5G and the 2021-released Pixel 6 5G.

Note: The Pixel 5a never made it to Canada, so we’ve decided to exclude it from the comparison. Also, we decided to include the Pixel 4a, even though it is no longer available to purchase since several Canadians who own the phone might be looking to upgrade.

In comparison, the new Pixel 6a sports a 60Hz 6.1-inch FHD+ OLE display with max 429 ppi brightness along with HDR support. HDR is also present in the Pixel 6, however, it was missing in the Pixel 4a.

The new Pixel 6a features a decent 4410 mAh, which is slightly smaller than the Pixel 6’s 4614 mAh battery, but considerably bigger than the Pixel 4a’s 3885 mAh battery. All three phones can last beyond 24 hours, though life may vary depending on usage.

Additionally, all three phones also feature fast charging, though the 4a can only go up to 18w, whereas the Pixel 6 can achieve a 21W top charging speed. The 6a, on the other hand, just like the 4a, is capable of max 18w charging speed.

The Pixel 6 also supports fast wireless charging, along with battery sharing, two features that are absent on the Pixel 4a and 6a.

The new Pixel 6a and the 4a both feature 6GB of RAM, whereas the 2021 flagship Pixel 6 features a higher 8GB RAM. All three devices offer 128GB of storage, along with a fingerprint sensor for authentication.

#Pixel6a is powered by Google Tensor—the same chip in Pixel 6—that learns and adapts to you for a more helpful, personalized experience.#GoogleIO pic.twitter.com/KX3t8OdCpM

The 2021-release 4a was powered by Qualcomm’s Snapdragon 765G Octa-Core processor, whereas the Pixel 6 and 6a both run on the company’s in-house Tensor chipset.

All three devices feature stereo speakers, though only the Pixel 4a sports a 3.5mm audio jack.

#Pixel6a has the Pixel features you love.

On the front, all three devices offer an eight-megapixel selfie shooter with ƒ/2.0 aperture and fixed focus.

Below is a list of all the camera features that the three devices have in common:

Magic Eraser in @GooglePhotos still erases unwanted objects—but now you can change the color of an object so it pops out or blends into its surroundings on #Pixel6a!#GoogleIO pic.twitter.com/jtTwBg1wkw

Then there are camera features like Magic Eraser, Real Tone, Face Unblur, Panorama and Manual white balancing that are exclusive to the Pixel 6 and Pixel 6a.

The new mid-range Pixel 6a smartphone costs $599 CAD, and will be available for pre-order on July 21st.

On paper, the Pixel 6a is definitely a big upgrade from the 2020-released Pixel 4a, though the Pixel 6 still remains the king. Stay tuned to MobileSyrup for a full in-depth review in the coming months to see how the 6a puts up in real-world use.

The post Here’s how the Pixel 6a squares up against the Pixel 4a and Pixel 6 appeared first on CableFreeTV.