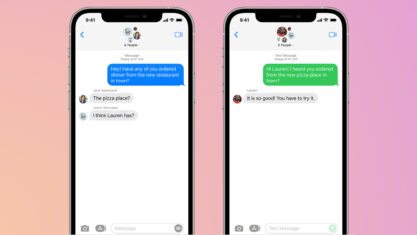 Toronto’s very own Drake dropped his seventh studio album, “Honestly, Nevermind” over the weekend, and the album’s third track, “Texts Go Green” is already a topic of conversation.

The track and its title reference what happens when an iPhone user blocks someone from contacting them via iMessage, and the blocked individual’s messages go through as green SMS bubbles.

Google’s marketing team was quick to jump on the track and release an “unofficial lyric explainer” video, which was tweeted out by the official Android Twitter account.

#TextsGoGreen hit us different, that’s why we had to drop this unofficial lyric explainer video #GetTheMessage

In the lyric explainer video, Google takes shots at Apple by showcasing the more general green versus blue bubble issue when Android and iOS users connect via SMS, and how Apple should adopt RCS (Rich Communication Services), something that Apple reportedly considered back in 2019.

“The Android team thinks Drake’s new song “Texts Go Green” is a real banger. It refers to the phenomenon when an iPhone user gets blocked. Or tries to text someone who doesn’t have an iPhone. Either way it’s pretty rough. If only some super talented engineering team at Apple would fix this. Because this is a problem only Apple can fix. They just have to adopt RCS, actually. It would make texting more secure too. Just sayin’. Great track tho.”

Google wants Apple to get rid of iMessage colour-coding, where message bubbles blue if sent to an Apple device and green if sent to a blocked number or Android phone. Google has historically called Apple out on the disparity, while a The Wall Street Journal report from earlier this year talked about how “Teens Dread the Green Text Bubble,” and the dominance of iPhone among young US users.

Check out the track in question below:

According to Google, if Apple adopts RCS, cross-device messaging will become safer and faster for users. RCS allows users to send and receive high-quality photos and videos, include read receipts, typing indicators and reactions. iMessage includes all of those features too, but only when you’re texting someone who also owns an Apple device, a disparity that Google wants to be abolished.

Annapurna’s Hindsight looks like a beautifully melancholy meditation on life