DJI Mini 3 Pro Review: The little drone that could 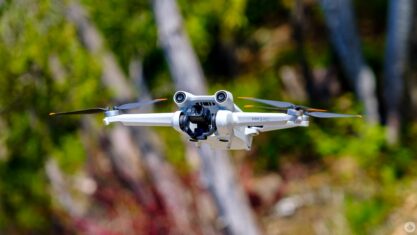 Before buying a drone, you need to ask yourself what you plan to do with it. Are you shooting movies? YouTube videos? Maybe you’re snapping TikToks? Are you just using it to have fun and capture a few memories?

Surprisingly, the new DJI Mini 3 Pro works for most of those purposes better than you’d imagine. Sure, it’s not going to be used in Hollywood blockbusters, but if you want to see a device that looks and feels like a toy punch above its weight class, keep reading.

The DJI Mini 3 Pro features a beast of a camera. The footage blew me away specifically with how well it works under low-light due to a new dual ISO. In my experience, the Mini 3 Pro is the best drone for everyone that I’ve used since it packs so much into its highly desirable sub-250 gram frame. This weight limit is important since it means the drone can be flown without a license in Canada and the U.S.

What’s new and why it matters

This year there are several upgrades packed into the DJI Mini 3 Pro, so it’s hard to know where to start, but for me, the best new features are the camera upgrades.

DJI has increased the sensor size slightly this year to 1/1.3 of an inch. This means it can get a pixel size of 2.4μm, which captures more light than the previous Mini drone. Combine this with a new f/1.7 aperture on the Lens and the new HDR processing, and you get stunning low-light imagery. The drone does get a little noisy under low light, but it’s manageable and makes the DJI Mini 3 Pro way more powerful than the Mini 2.

When the sensor isn’t pixel binning, you can also take excellent-looking RAW images with the full 48-megapixel sensor. I’m used to smaller drones like the Mini 3 snapping pictures similar in quality to a smartphone camera, but DJI’s latest offering actually beats a lot of smartphones. The sharpness and clarity is astounding. My only complaint is that it’s disappointing you can’t focus on objects that are close to the camera. 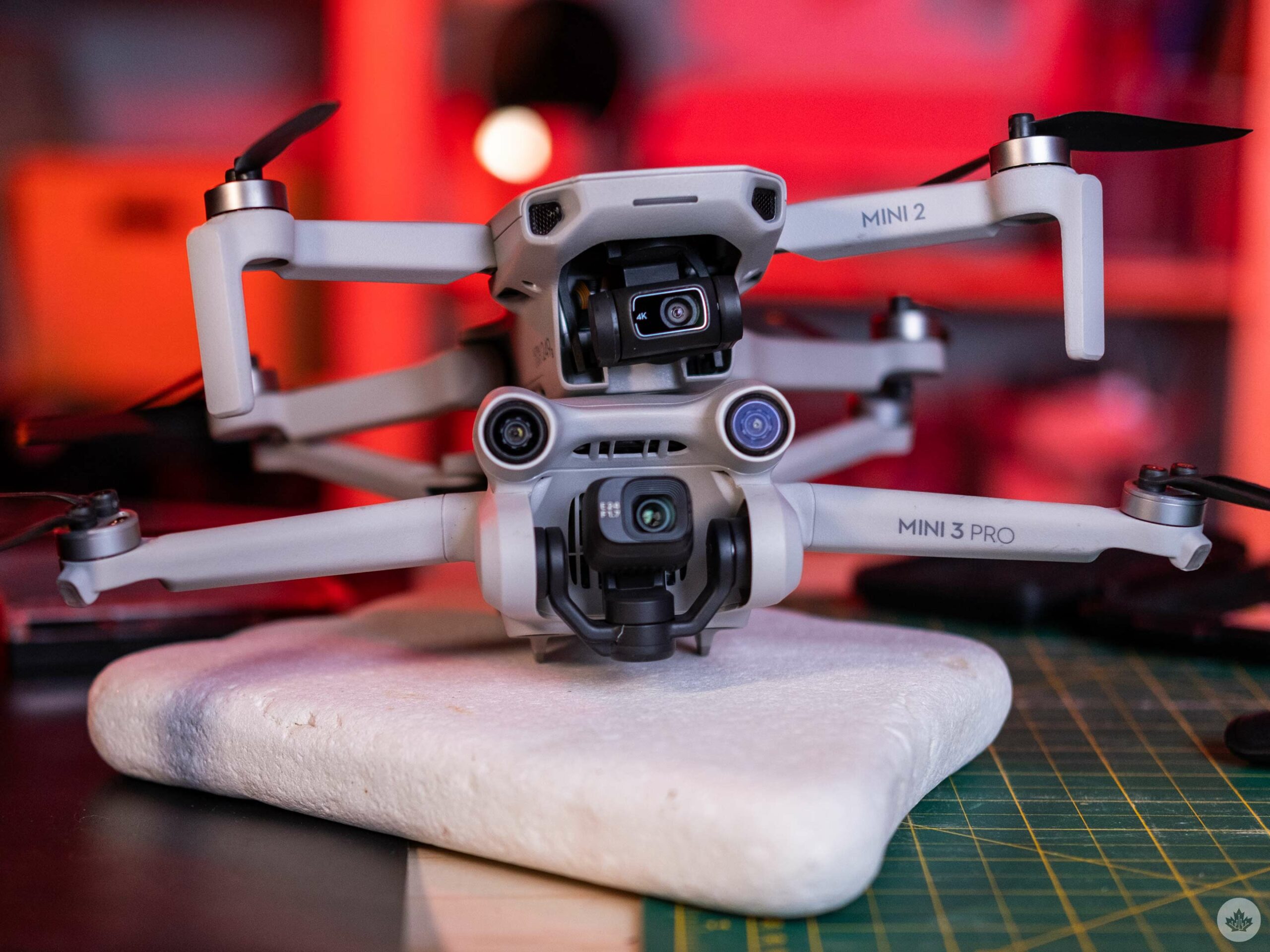 The wingspan of the Mini 3 Pro is even wider than the Mini 2. The Propellers are a little longer too.

The extra processing power that unlocks improved low-light performance also allows you to record 4K 60fps footage, so you can get that excellent slow motion pan in the sky. However, you need to make sure you have a fast enough microSD card that supports it. That feature never became available to me during my review unit, so most of the video I shot for the video review was 4K 30fps on Auto since I didn’t have a chance to test the ND filters either. Still, it turned out pretty great.

I’ll also mention that DJI tacked a new D-Cine-like colour profile that’s set up for grading, which is another plus that makes this drone more accessible to creators wanting to capture a wider range of colours.

There’s one other important camera setting available here — vertical video. DJI has reengineered the drone’s gimbal so it can flip the entire camera array sideways, letting creators film nativity in portrait orientation. If you make a lot of vertical videos, this makes the DJI Mini 3 Pro the best drone you can get for that.

Some of the more exciting and single creator-focused modes like ‘Active Track,’ ‘Master Shots’ and ‘Quick Shots’ are all disabled in the vertical shooting orientation. This is annoying and something I hope DJI fixes soon. You can always crop down horizontal footage, but this is an extra step that shouldn’t be necessary when the drone can shoot vertically so easily.

When you’re shooting horizontal, these features work extremely well. During my tests, the Active Track mode responded expertly while I walked around. It was able to follow me through trees, crowds of people and over a bridge. The experience felt pretty amazing. I even cropped this footage in for a vertical video, and it held up well enough.

The final new feature is a design that incorporates the tracking sensors. DJI says the widened wingspan, longer propellers and smoother body shape help the little drone stay more stable in the sky. In my tests, the DJI Mini 3 Pro still got pushed around more than the larger Mavic 3, but it was stable enough.

However, the sensors unlock a lot of potential since they can track people, cars and pets, to follow them around like a little dash camera for your life. It’s astounding when it works, but since there are only sensors on the front and bottom, you need to be careful to make sure the drone doesn’t go sideways into things.

Overall, the Mini 3 Pro takes pretty much all of the desirable features from the DJI Air series of drones and puts it into a sub-250g body which means that it can be flown without a drone license, and it’s pocketable. This instantly makes the DJI Mini 3 Pro the most convenient on the market, which means a lot when you’re using a drone since they take so much practice and setup to get good with.

A sharper eye in the sky 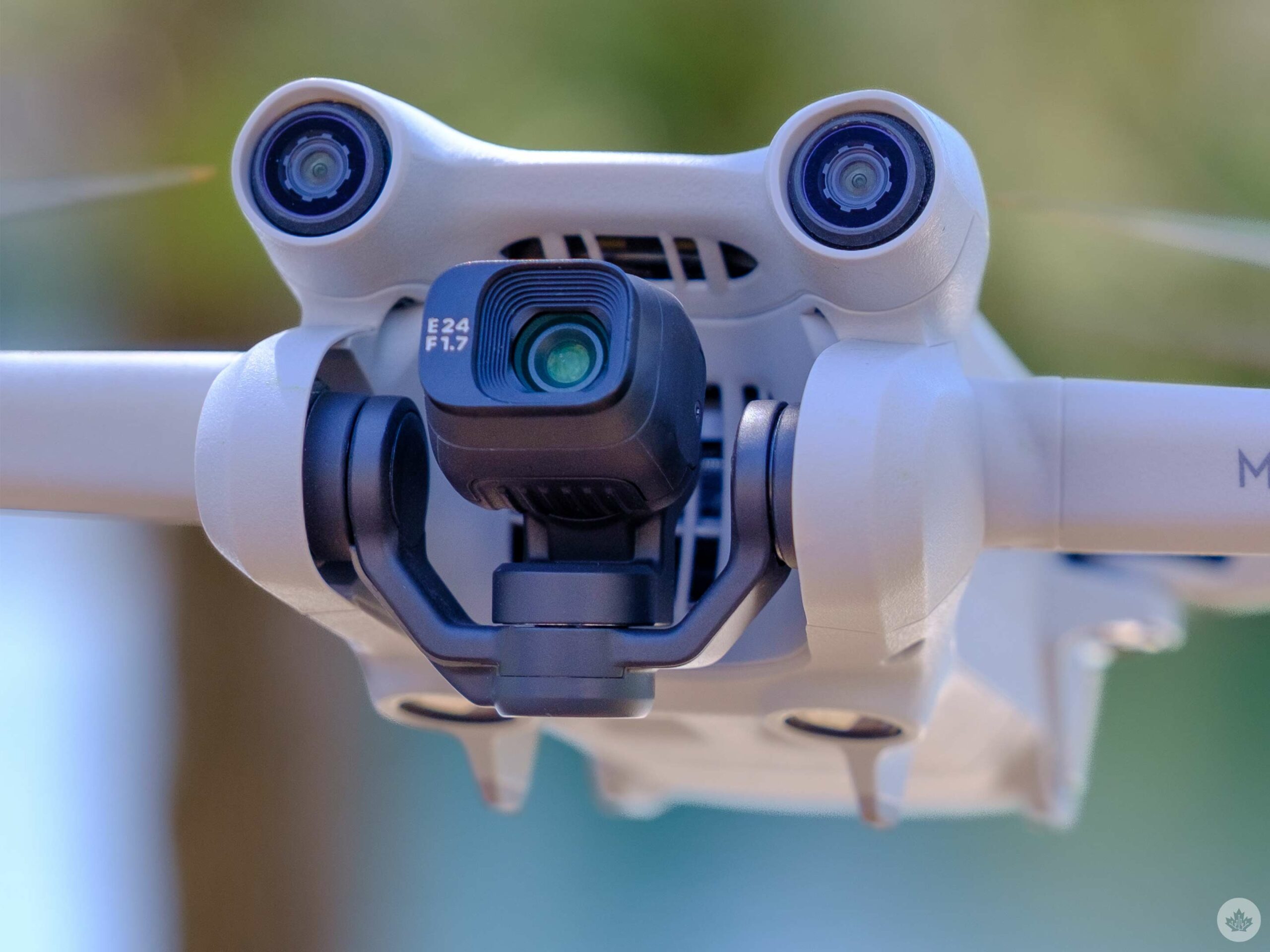 Right away you can notice a small bump in quality in still images over the Mini 2. This doesn’t sound exciting, but the Mini 2 was already really decent, so the extra sharpness that the Mini 3 Pro adds to the equation makes the images pop. In lower light situations, the game changes and the Mini 3 Pro performed way better with less noise and a stunning dynamic range.

If you actually want to print off some photos, the Mini 3 Pro is likely the better option, and for anyone who wants to take pictures or film sunsets (I think all drone owners), the new drone is a clear step forward. The colours on the Mini 3 Pro are also a bit richer straight out of the camera if you like shooting JPEGs. 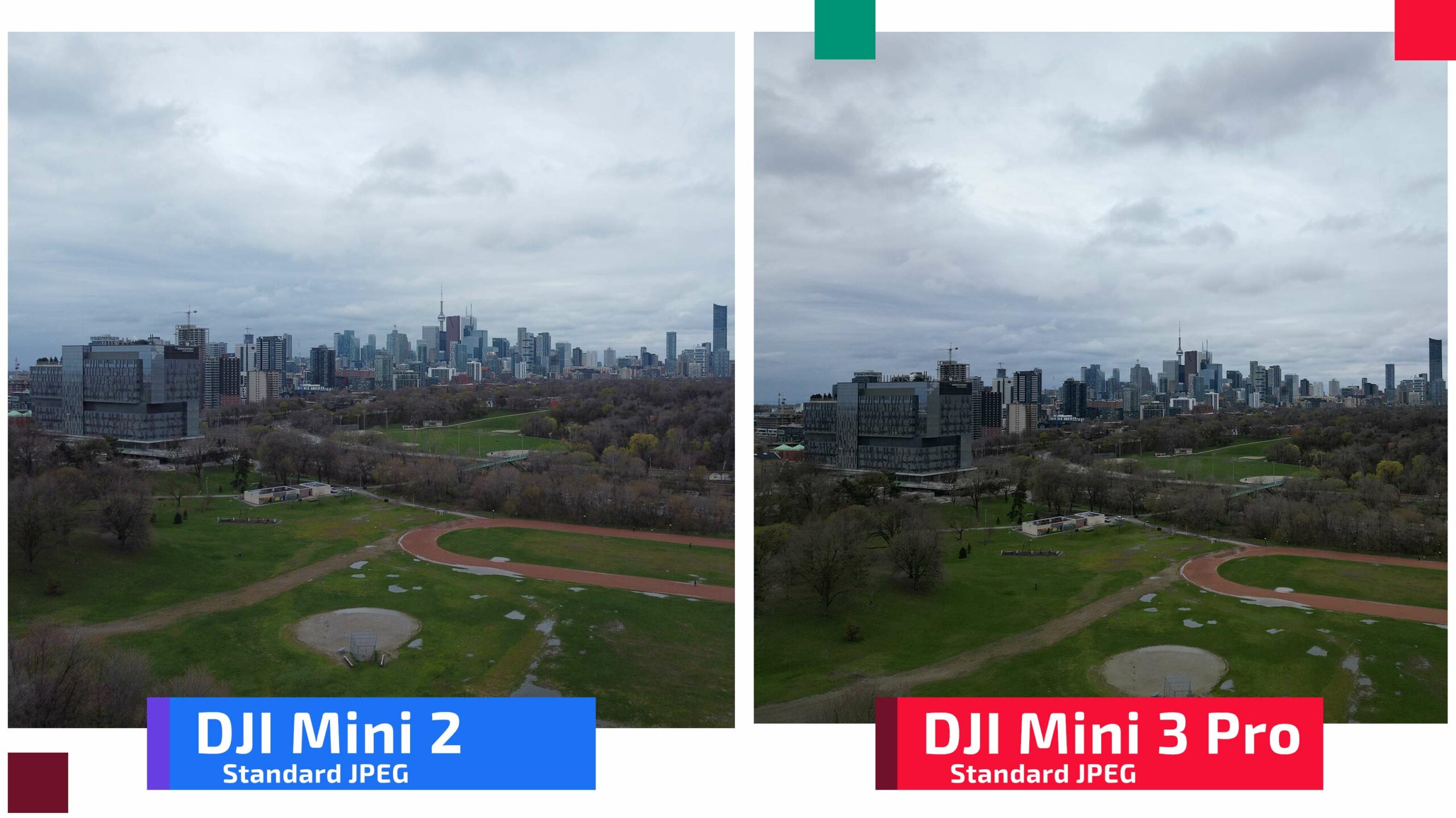 Video is a bit of a different story. I’m sure for a lot of people the simple addition of 4K 60fps slow motion will be enough to make them salivate over this cute drone, but there’s so much more than that. The simple fact that this drone can shoot in HDR helps its footage look a lot cleaner, and the dual native ISO helps control noise in the image.

Obviously, the higher up and the further away from your subject, the better the picture looks as details blur together naturally. But even from moderately close distances, the drone’s footage is crisp and detailed. 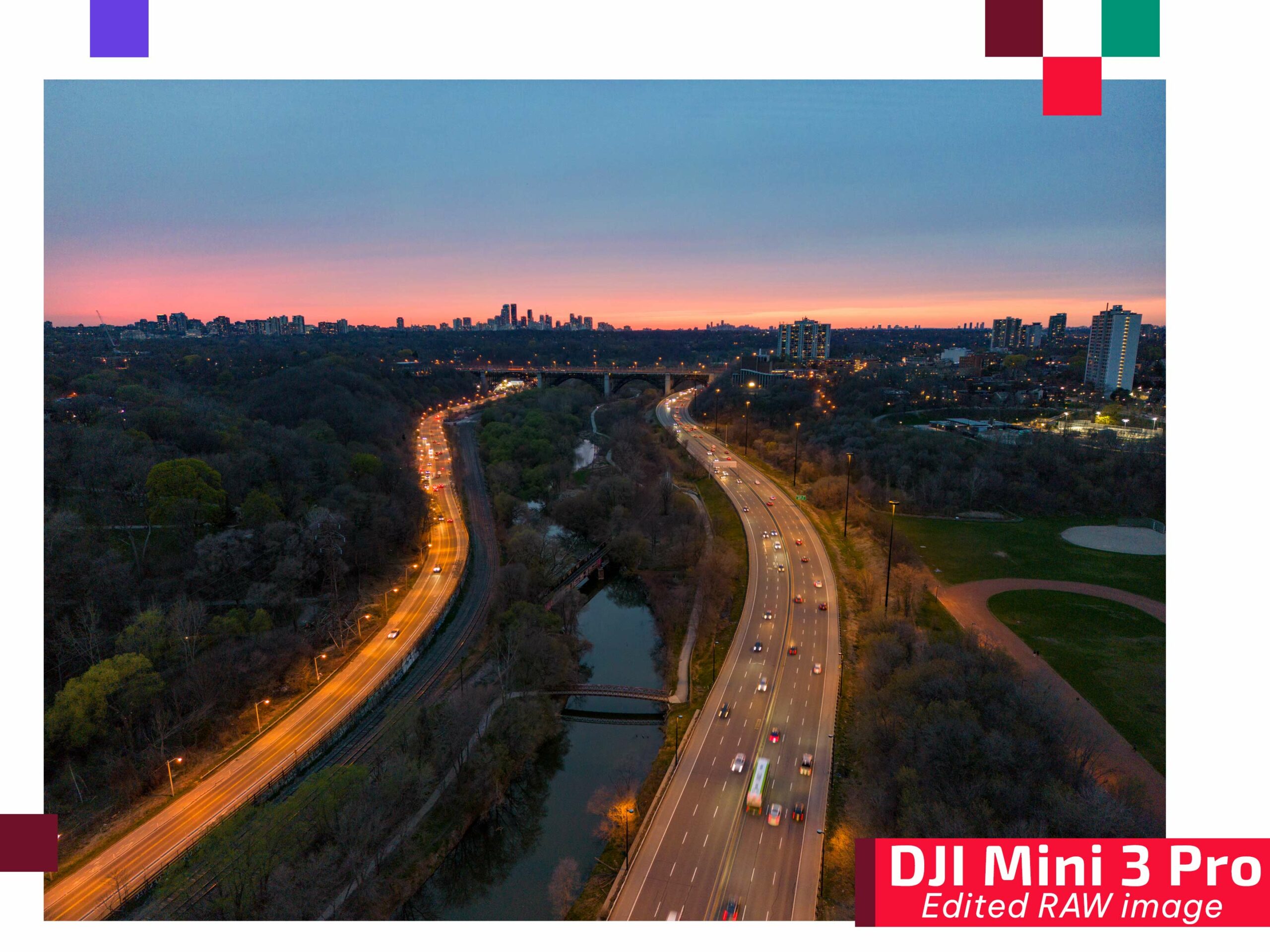 There’s a digital 2x zoom that’s also there, it’s considerably less sharp and noisier than the main lens, but to be honest, I think with a tiny bit of help in editing, you can still get sweet shots with it. The subtle parallax that it adds to your frames and the compression you get from the 48mm equivalent focal length is something most flying videographers shouldn’t sleep on.

As I said above, this isn’t going to be featured in any Hollywood blockbusters, but for anyone more casually interested in drones, this is the model for you. As much as I loved the power of the Mavic 3 when I tested it, the large size made it pretty inconvenient to use and transport. The Mini 3 Pro doesn’t have that problem, and its footage is still more than enough for my use cases, making YouTube videos and casual photography.

A new controller and more 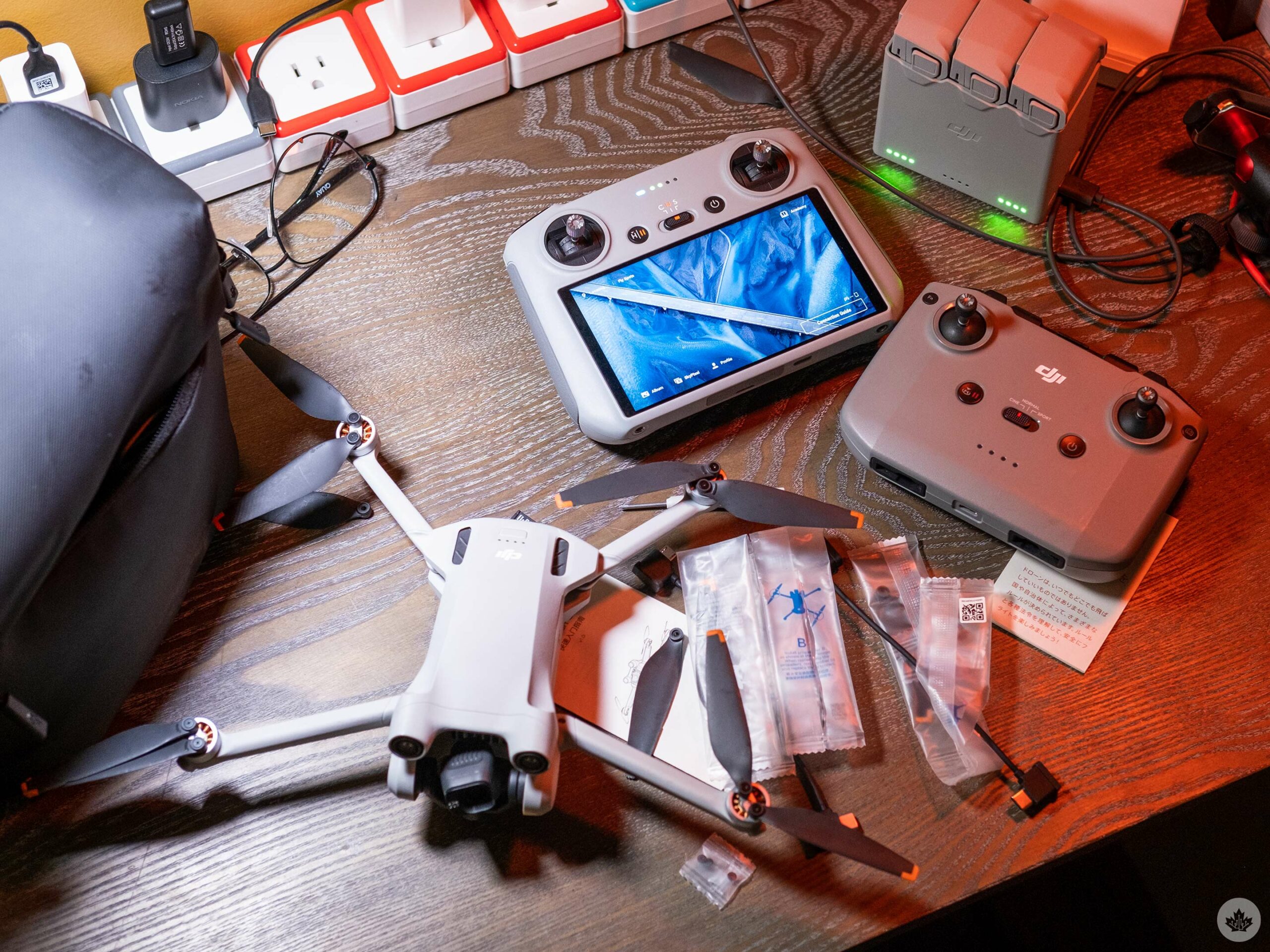 Most of the gear in the DJI Fly More Kit Plus.

Notably, this is the first Mini DJI drone to come without a controller at its base cost ($869 CAD). If you’re upgrading from a Mini 2 or Air 2S this is likely fine, but most people will likely want to shell out for one of the more expensive packages that come with a controller.

There are two. The first is the ‘DJI RC-N1’ that comes with most modern DJI drones. It’s the same controller that came with the DJI Mini 2 and the base model of the Mavic 3. This controller feels nice in hand, has a beefy battery and needs to be plugged into a phone to work. This new drone plus basic controller option is priced at $979 CAD. 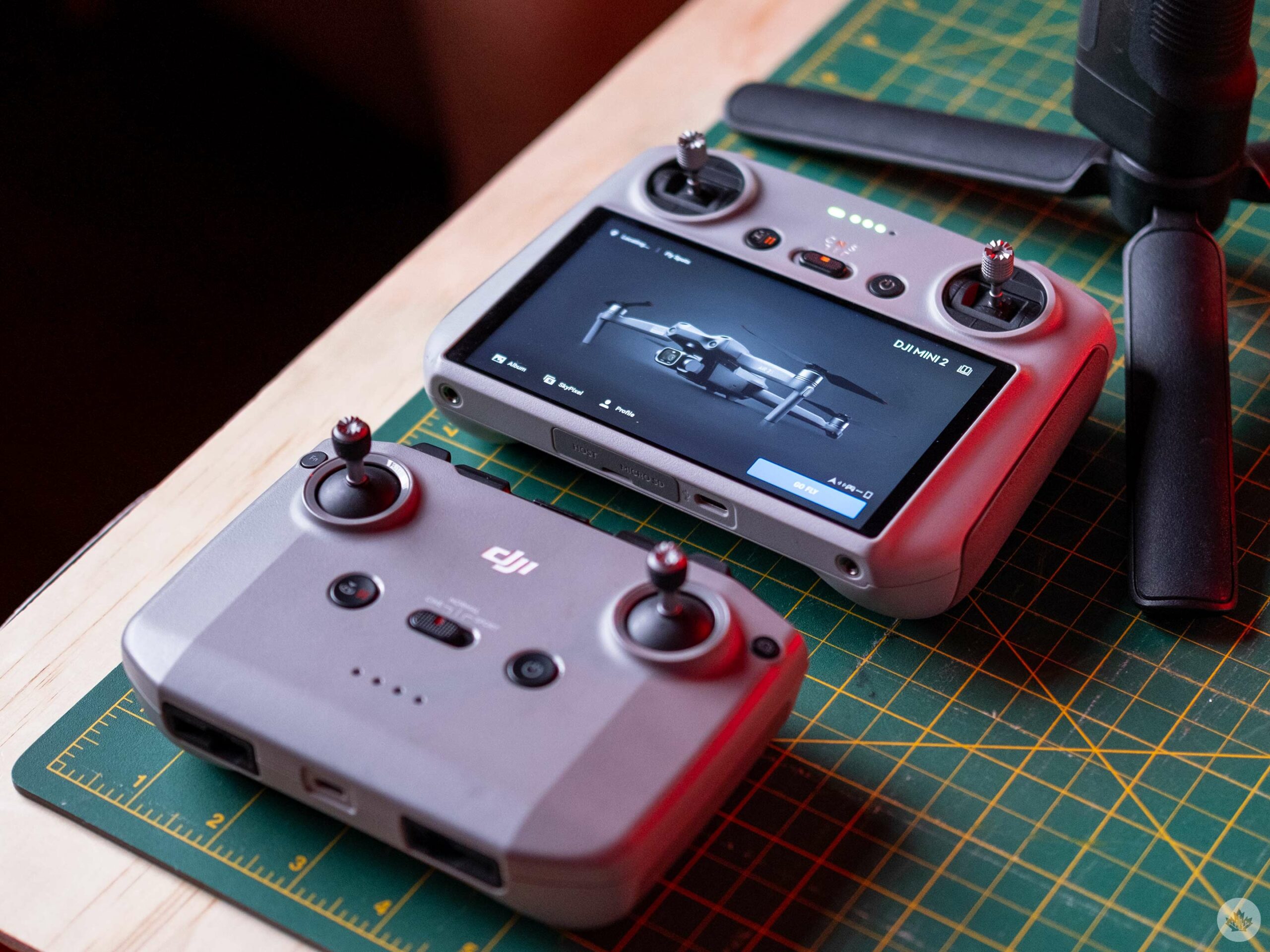 The new controller is called the ‘DJI RC,’ and it has a 700-nit screen built into it so you can keep your phone free for other tasks. This new controller even has a MicroSD card slot so you can back up your footage or check out the drone’s card on the go. There are also two USB-C ports on the bottom; you can use one for charging and the other is for a China-only accessory.

So far, I like the new controller, but it’s less about its new features and simply because it conveniently keeps my phone free which is a nice plus. Having said that, 700 nits isn’t as bright as some phones can go and in direct sunlight, I did find it hard to see the screen. 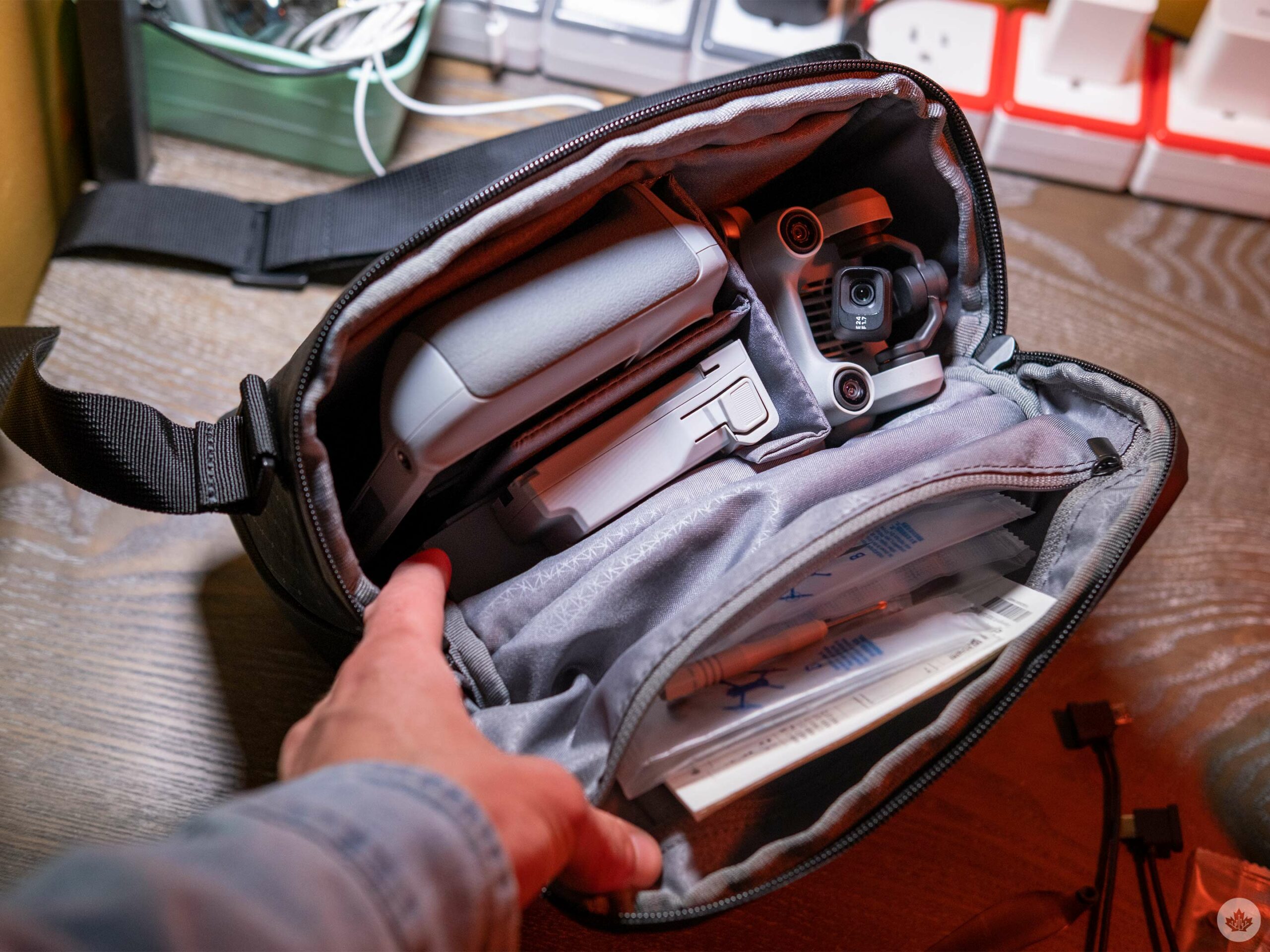 As usual, the DJI ‘Fly More’ bundles are a nice touch with a fun little bag, two extra batteries, a neat charger and lots of bonus propeller blades.

Like many other DJI drones, the Mini 3 Pro can take ‘MasterShots’ and ‘QuickShots.’ These are some preset flight paths that you can get the drone to follow around a location or a person. Basically, you just tell the drone what you want it to film and it will do it as long as that thing isn’t moving. If it’s moving you need to use tracking.

QuickShots are single motions like panning around a subject or a zoom in/out. MasterShots takes this to an extreme by connecting a bunch of QucikShots into one long take and then splicing that all together for you. Both are pretty handy to have, but I found myself using QuickShots more than MasterShots because I generally only needed one angle of a thing, not an epic edit of a bunch of shots. Still, both modes are fun, and I’m sure people will continue to get a ton of use out of both. These features along with the ability to take panoramas and hyper lapses are also on other DJI drones. 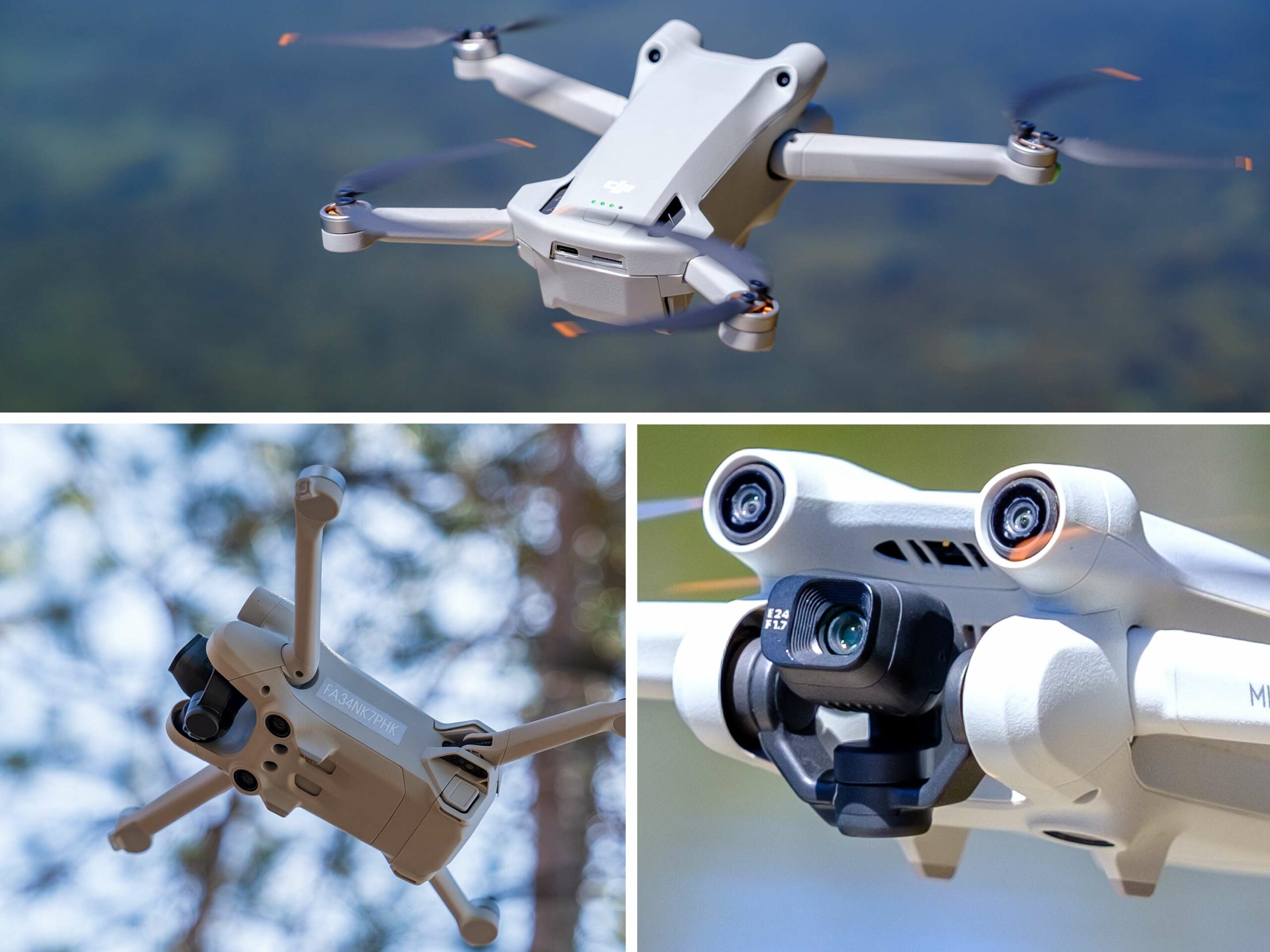 The tracking features are what blew me away the most with the Mini 3 Pro. Having a drone smart enough to actually follow you while you’re walking, biking or driving without another person actively controlling it is a huge plus. Seriously, if you’re part of a small filmmaking team or a solo creator, the utility of this feature can’t be understated. Part of the reason I’ve been unable to add drone shots to most of my recent MobileSyrup videos is that they take a lot of time, skill, practice and a pilot to film me, making moving cars and people pretty much impossible to capture. With the new active track feature, all that goes away.

The last thing I’ll mention here is the DJI 3 Pro’s battery life. Generally, I found the 34 minutes of flight time in ideal conditions to be enough (it.s closer to 25 with some wind). That said, if you want extra flight time, DJI also sells a battery called the Intelligent Flight Battery Plus that can boost the flight time to around 47 minutes, but there’s a catch. This battery raises the weight of the drone slightly above 249 grams meaning when you’re using it, you technically need a drone license. 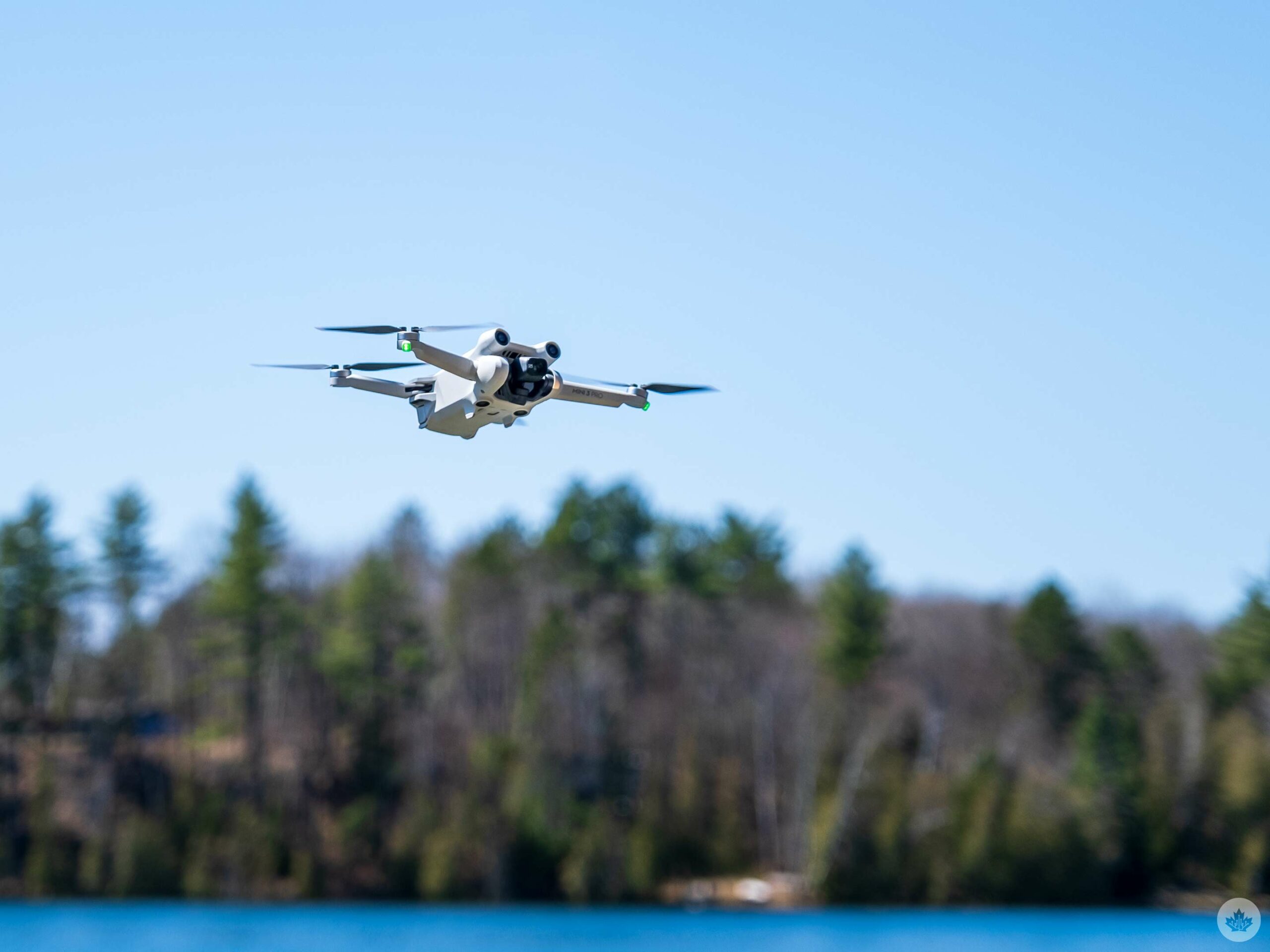 The post DJI Mini 3 Pro Review: The little drone that could appeared first on CableFreeTV.