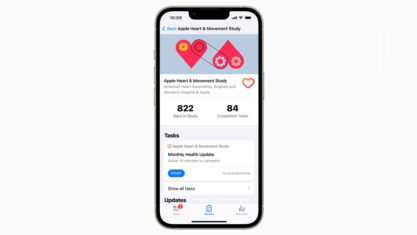 Apple has released a new report outlining its approach to the digital health market, including its focus on consumer health/fitness features and broader healthcare systems.

Led by Apple’s chief operating officer Jeff Williams, the report is a glimpse behind the curtain regarding the tech giant’s approach to the healthcare market. Apple also confirmed a partnership with Stanford University’s School of Medicine regarding larger-scale medical studies.

On the Canadian side of things, the report also includes the use of iPads at vaccination clinics and a heart failure study with the University Health Network.

The majority of the report is focused on the Apple Watch and its various health sensors given the pivotal role Williams played in bringing the wearable to market.

“Our vision for the future is to continue to create science-based technology that equips people with even more information and acts as an intelligent guardian for their health, so they’re no longer passengers on their own health journey. Instead, we want people to be firmly in the driver’s seat with meaningful, actionable insights,” said Williams in a press release.

The study also delves into the lengths the tech giant goes to ensure that health information remains secure on the iPhone and Apple Watch.

Apple says that it plans to continue developing health-related features for consumers and the healthcare industry.

For an in-depth look at the full study, follow this link.